Simbuini Trail, with the essential support by local governments and sponsor, comes to life thanks to the ideas, passion, commitment and hard work of a close – knit group of people, who love sport and Simbuini area. Know them better:

MARCO D’INNOCENTI: since he was a child, he loves running, and the run is life style for him. He tooks a part in about 120 marathons with a personal best of 2h8’23” during a competition in Venice, in 1999. He was in the Italian team of 100 km, winning for two times the team world title (2008 e 2012). For several years, he is in the organization of an event “La Speata”. He was one of the father of TMS. During everyday life, when he doesn’t run, he loves drawing “little house”. He lives in Subiaco, and he has two sons, Luce and Libero. His slogan is: “ A head to think, two legs to run, and a heart to love”

RESPONSIBLE OF COMPETITION and ENROLLMENTS 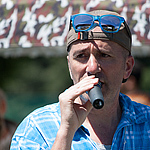 GIOVANNI LOLLOBRIGIDA: a lover of mountain and running, as well as being always at the forefront of challenging preliminary stage. “The Tiger” is the voice and mascot of Simbuini Trail. In everyday life, he works like public driver in the capital, but he also part in parties and concert. He lives in Subiaco, where, since the first edition, he organizes “La Speata”, running road race.

RESPONSIBLE OF COMPETITION and LOGISTICS

MICHELE LANDO: 36 years old, from Subiaco, married and father of one son. Economic degree and a lot of passion for sport and nature. Among the pioneers of snowboarding in central Italy, nowadays he follows alpinism, downhill and cross – country skis. He is the president of the local section “Sport Fisherman High Aniene”, during free time he loves running in the Simbruini nature , where he find the best environment for long trips.

UMBERTO ANTONELLI: he was born in Subiaco, where he lives now with his family. He has work recently at the last update of trail network of Simbruini and at the realization of the new excursionist map. In the trail field he had worked at the individuation of tracks, at the logistic and at the collocation of support personal and also at the safety along the paths with the close collaboration of State Forestry Department, Firefighters group, and Alpin Civil protection.

ALESSANDRO GIORDANI: walking up and down the mountain since he was young. Walk for him is the right way to safe the nature, but also a professional work and a life style. Fascinated by the infinitive beauty of Appennino and Simbruini landscape, he was immediately the supporter and the author of TMS, in order to promote the territories. Because he has from time of mind loved the cartography, he has contributed to the recent update of Simbruini trail network. About the trail field he has worked at the individuation of paths and trails the most fascinating. He lives bathed in the sunny olive tree of Appennino, with is family: the meaning of everything.

MARIA NOVELLA SBARAGLIA: she is a lover of mountain, fascinated of out-door activities and environmental protection; she did of his sport, the orienteering, a metaphor of life. Because of his sport, he travelled around Italy and Europe, but she didn’t find any place wonderful like Simbruini paths, whose beauties deserve to be experienced and respected. Engineering environmental degree and part of much association like Orienteering Subiaco Group and “Vivere l’Aniene” she strongly believes to the collaboration especially if it has the main goal: the realization of the same dream and the knowledge of our place.

TRACKS PLANNING and RESPONSIBLE OF COMPETITION

DIEGO CIAFFI: he works like public transport during the daily life, he called himself “ferryman”, and when “he doesn’t sail in the eternal city” he spends his free time between mountain, agriculture and running. He oversaw the organization and management of refreshments in the race.

FRANCESCO FERRERI: he is an excursionist and photographer. Since his childhood, he moves in Appennino Mountain , in particular Simbruini: one of his favorite adventure mountain. He thinks about Photography like the natural extension of the passion for the land; he tries to communicate – through the picture – the meaning of beauty and sacredness of Nature. For him is not important the communication and divulgation but also the conservation and protection of Appennino natural estate. He has worked to build the website, the pictures showed inside and video shooting in the race.

DANIELE FRIGIDA: he is a great lover of mountain and photography. For several years he moves in the Appennino mountain, he is constantly looking for hidden and unspoiled corner. In particular manner, he dedicates his task to a more diffusion of knowledge about he biggest natural estate and the landscape of “his” Simbuini, he is earnest that with the totally understanding only of the distinctive features of a particular territory its possible obtain the real increase in value, first at all like conservation of biodiversity. He has worked to build the website and for the pictures showed inside.